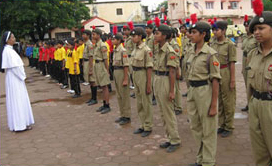 NCC was conceived in 1917 when India Defense Act was promulgated with an object of making up the deficiencies in the Armed Forces by raising the University Corps. In 1920, with the passage of India Territorial Act, University Corps was replaced by University Training Corps. In 1942, this Corps was rechristened University Officers Training Corps. In 1946, a committee under Pandit H N Kunzru was set up at the behest of Pandit Jawaharlal Nehru to formulate the establishment of an organization capable of training and motivating the youth of the country to become better citizens and leaders in all walks of life. Consequently, the National Cadet Corps came into being on July 16, 1948 with the promulgation of the NCC Act XXXI of 1948. NCC was placed under the Ministry of Defense. 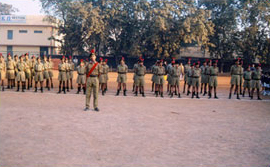 NCC was established in Vishwadeep Senior Secondary School in 1987 with 100 boys cadets and the First NCC Officer was third officer T.R. Sandy commissioned on 10.12.1988 and retired as Chief Officer on 4.05.2010. He enlarged the troop with 50 girls cadets and proper training has also been given to them. Second Officer Santoshi Soni was in charge as NCC Officer. She was commissioned on 22.12.2008. All the specified activities related to NCC is running in the school successfully.